The biggest award ceremony, the 91st Annual Academy Awards 2019 had happened, and Hollywood’s biggest names dressed up in their finest threads to celebrate the greatest Awards Show of all time. Oscars is not only the event of the nominating the best films or best actor and actresses, but it is also a night of glamour and celebration of fashion because of its memorable style moments. The fashion lovers excitedly wait for the red carpet looks to observe the beautiful and extraordinary dresses worn by the world-famous faces. The 2019 Oscars red carpet did not let us down as well, and the celebrities pulled out their very best dresses to impress on the biggest night of the awards show calendar. This year, the celebs seemed to favour two colours: metallic silver and pink, while we saw lots of structured gowns and layers upon layers of tulle. In this post, we decided to select the 15 best looks that you can get inspired for spring season. There are looks from both the Oscars Academy Awards and Vanity Fair's annual Oscars Party.

The star of The Hunger Games, 20 years old actress Amandla Stenberg stepped foot on the red carpet donning this 20s-inspired Miu Miu dress that looks gorgeous. In order not to fade the light of the dress, she wore simple accessories and keep her makeup simple as well. The colour of dress consist of dusty pink and pale mint colour which are the trend colours of the season. 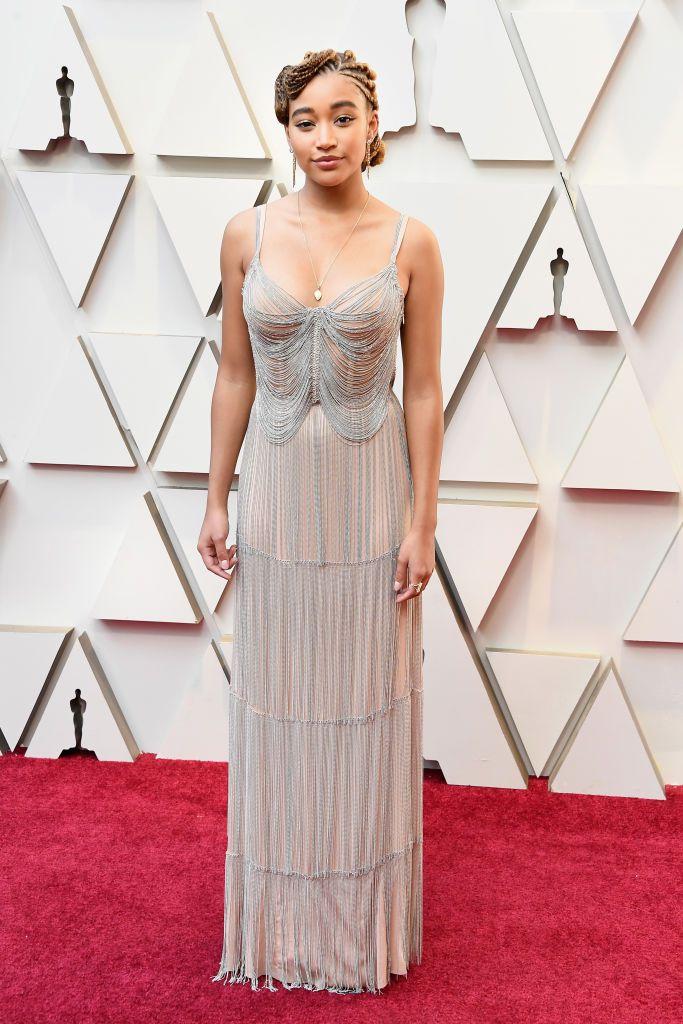 Vice star, Best Supporting Actress nominee Amy Adams, looks like a literal work of art in her Versace gown. She mostly prefers timeless outfits in her academy award looks. For 2019 Oscars ceremony, the actress chose a strapless mermaid silhouette gown in ivory shade. Rather than opting for complex look, she left her hair in loose beachy waves. Her statement Cartier necklace adds the shine to the neckline of the gown. 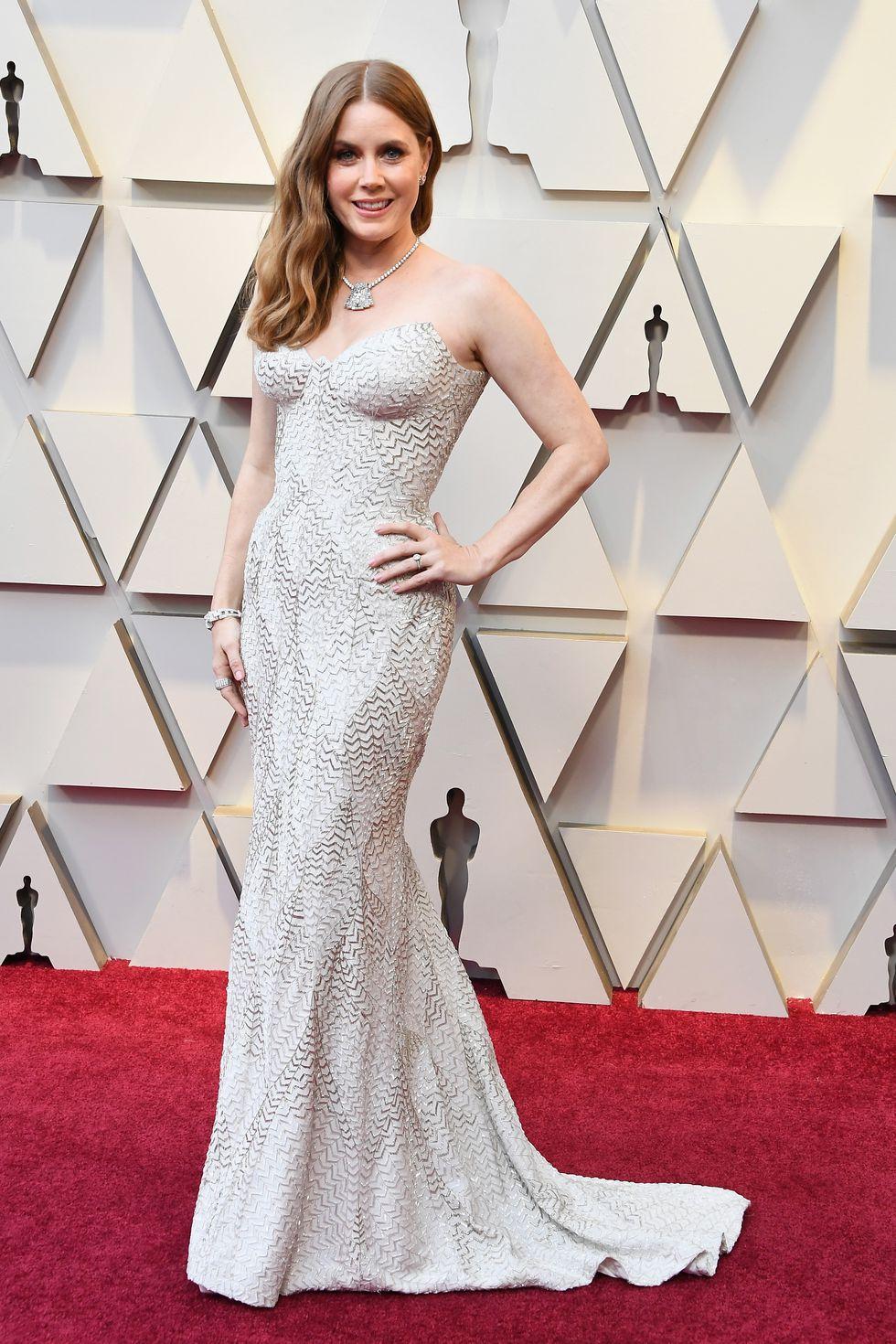 If there is one colour dominated on the Oscars 2019 red carpet it had to be pink. The most notable example was worn by Angela Bassett. Her one-shouldered Reem Acra gown looks perfectly suited for her attributes and bring the spring vibe to the red carpet. The most notable part of the dress was the oversize sculptural bow on her shoulder while the rest of silhouette remained relatively simple. By pulling her hair back into a sleek low hairstyle she made sure that the focus was entirely on her outfit. Like previous years, we can confidently say that she looks astonishing this year as well. 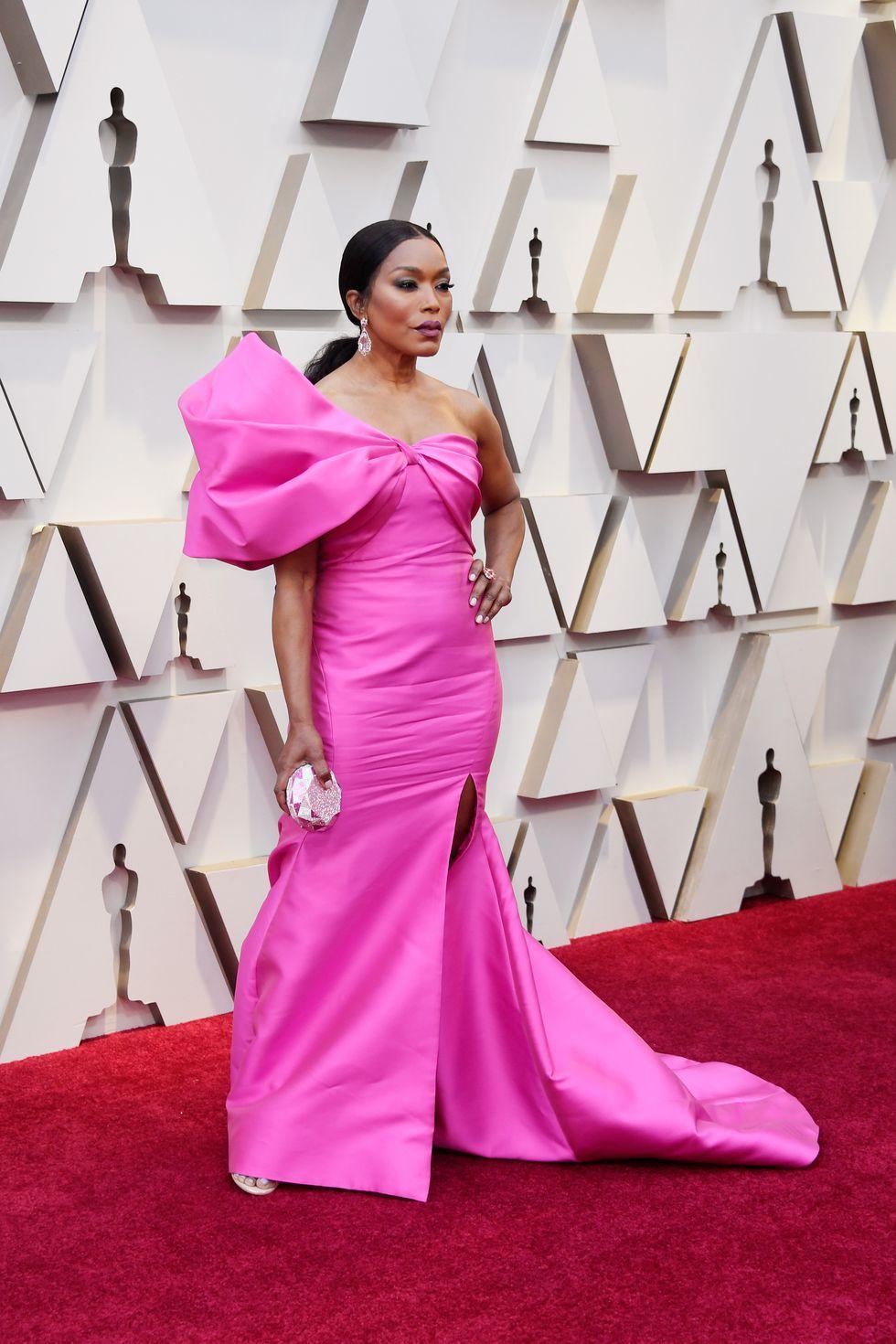 The popular Canadian actress and model, best known for her performance as Robin Scherbatsky in the sitcom “How I Met Your Mother”, Cobie Smulders wore Elie Saab at the 2019 Vanity Fair Oscar Party. She looks gorgeous in this mint coloured sparkling Ellie Saab dress. As the dress is as shiny as diamonds, she kept her hairstyle simple and wore only earrings as an accessory. 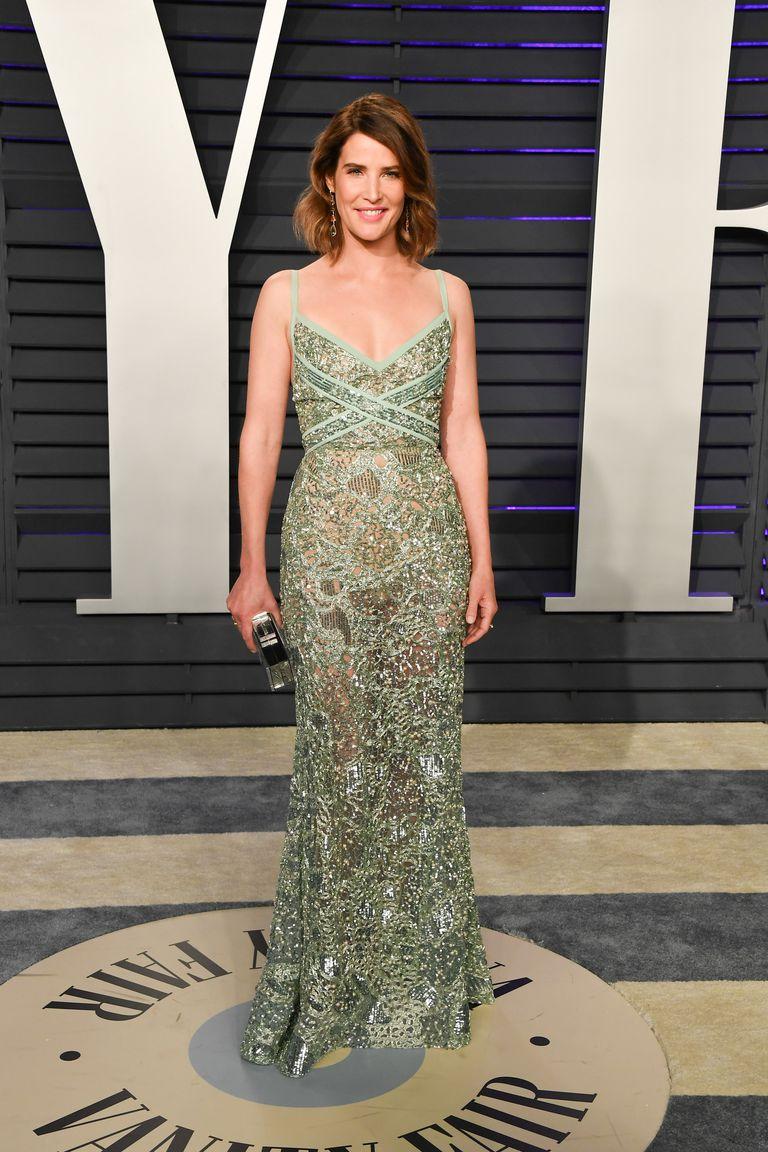 The Crazy Rich Asians star Constance Wu was a standout in off-the-shoulder custom yellow Atelier Versace gown. She completed her look with Swarovski crystal detail at the bodice and wearing a simple, elegant ponytail. The marigold yellow gown and lightweight material made her like she was floating on air. The dress perfectly appropriate for this season that will make you feel fresh. 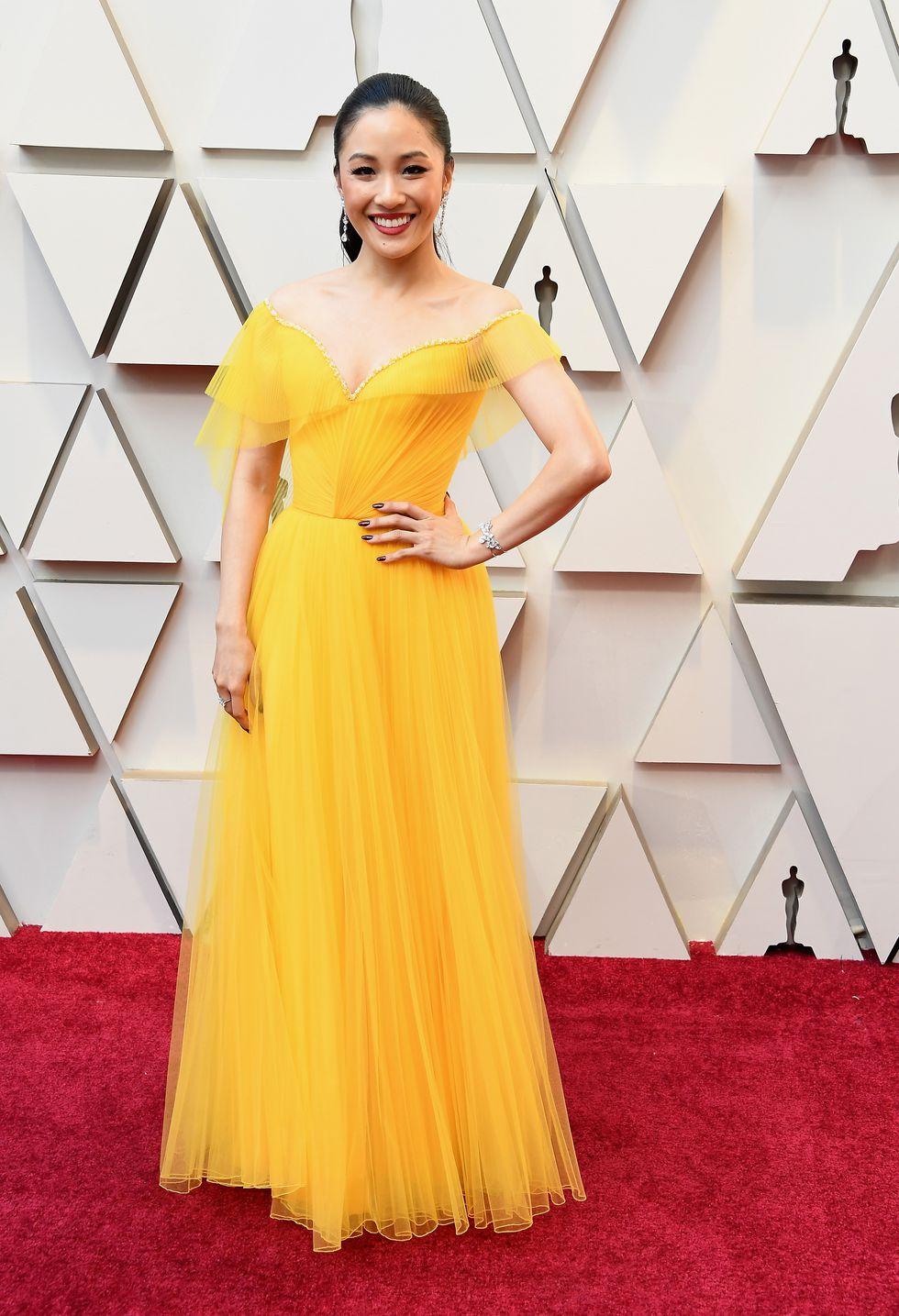 It is sad to say that the most viewed TV series of the last 8 years Game of Thrones (GOT) will be airing its final season in 2019. The Mother of Dragons, the star of Game of Thrones, Emilia Clarke never fails to impress us with her interesting yet classic picks. For this occasion, she opted for an asymmetrical gown by designer Balmain. Emilia Clarke is looking even more royal than usual in this shimmering lilac shade and the eye-catching fabric felt like we had never seen before. She completes her look with her gorgeous smile as always, she does. We will miss you Daenerys Targaryen! 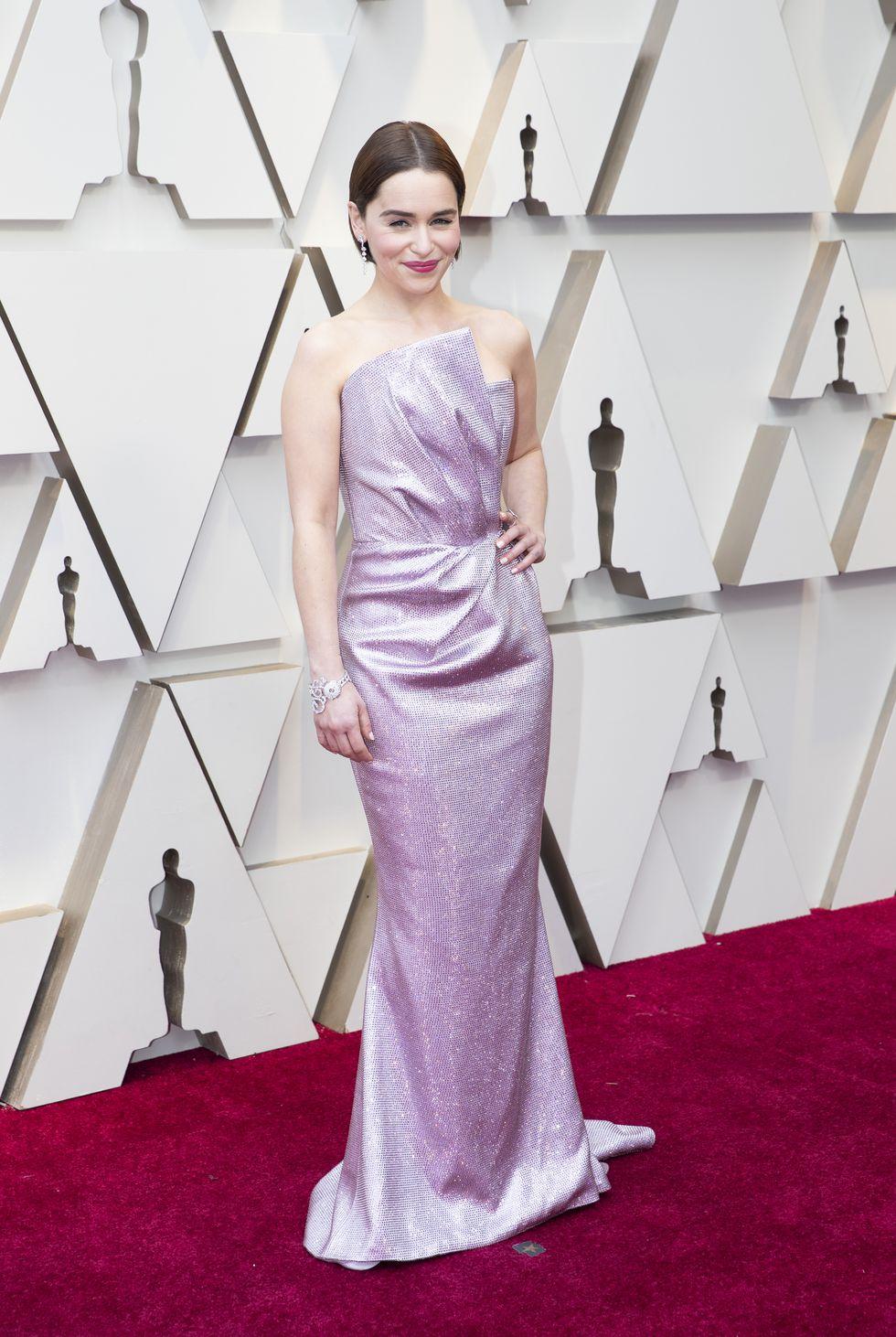 The Academy Award winner, the Best Actress for her performance in the romantic musical La La Land (2016), Emma Stone is proving to be one of the ideal looks of the night in this bronze-coloured, meme-inspiring dress by Louis Vuitton. As usual, she looks charming in her simple makeup and hairstyle. 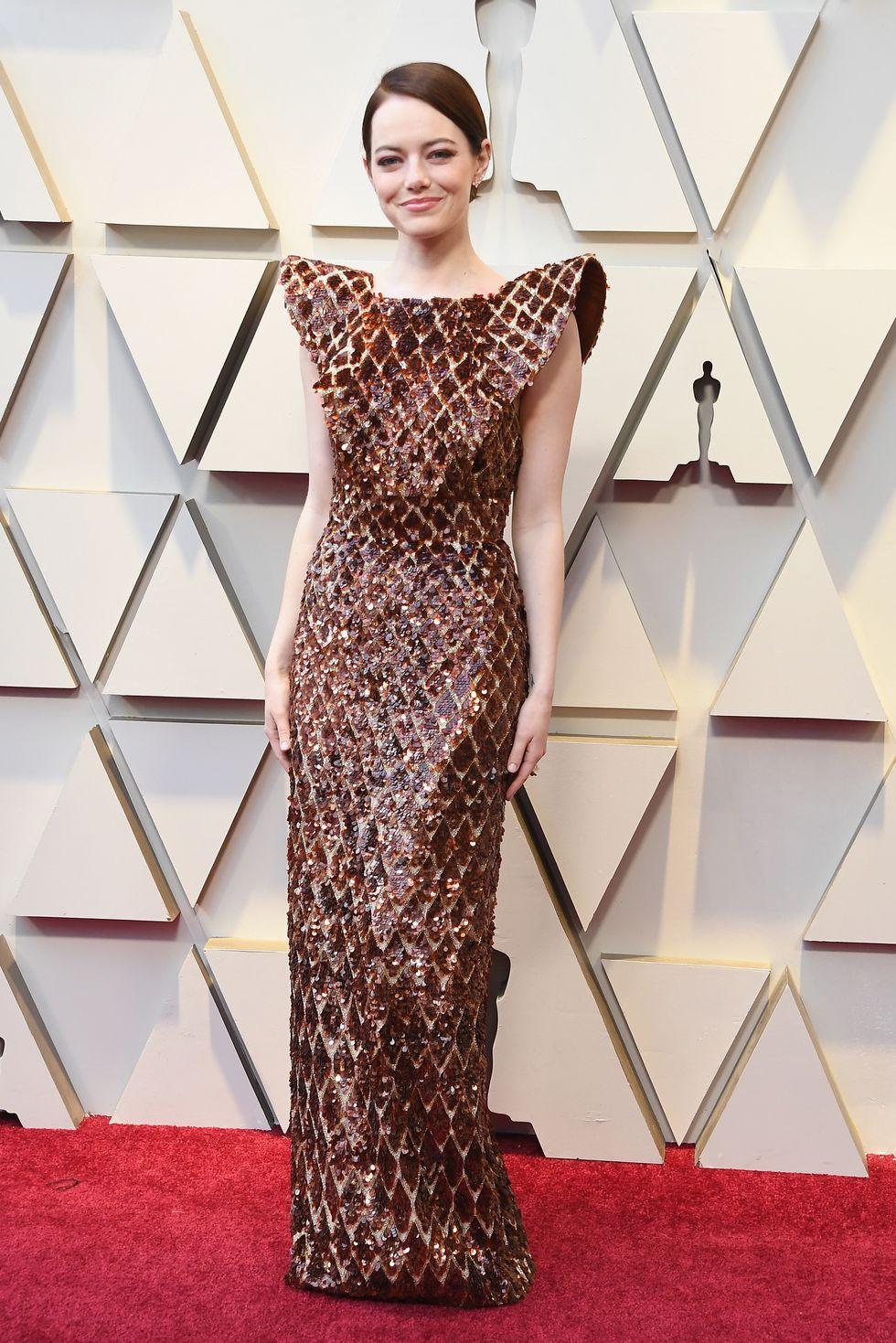 The Nominee of the Best Supporting actress Hailee Steinfeld chose the dress by Elie Saab at the 2019 Vanity Fair Oscar Party. With this elaborate dress, she brought the spring vibe to the party. As her dress is the centre of the total look, she kept the rest of the look as simplistic as possible by wearing transparent stilettoes and keeping neckline clean. 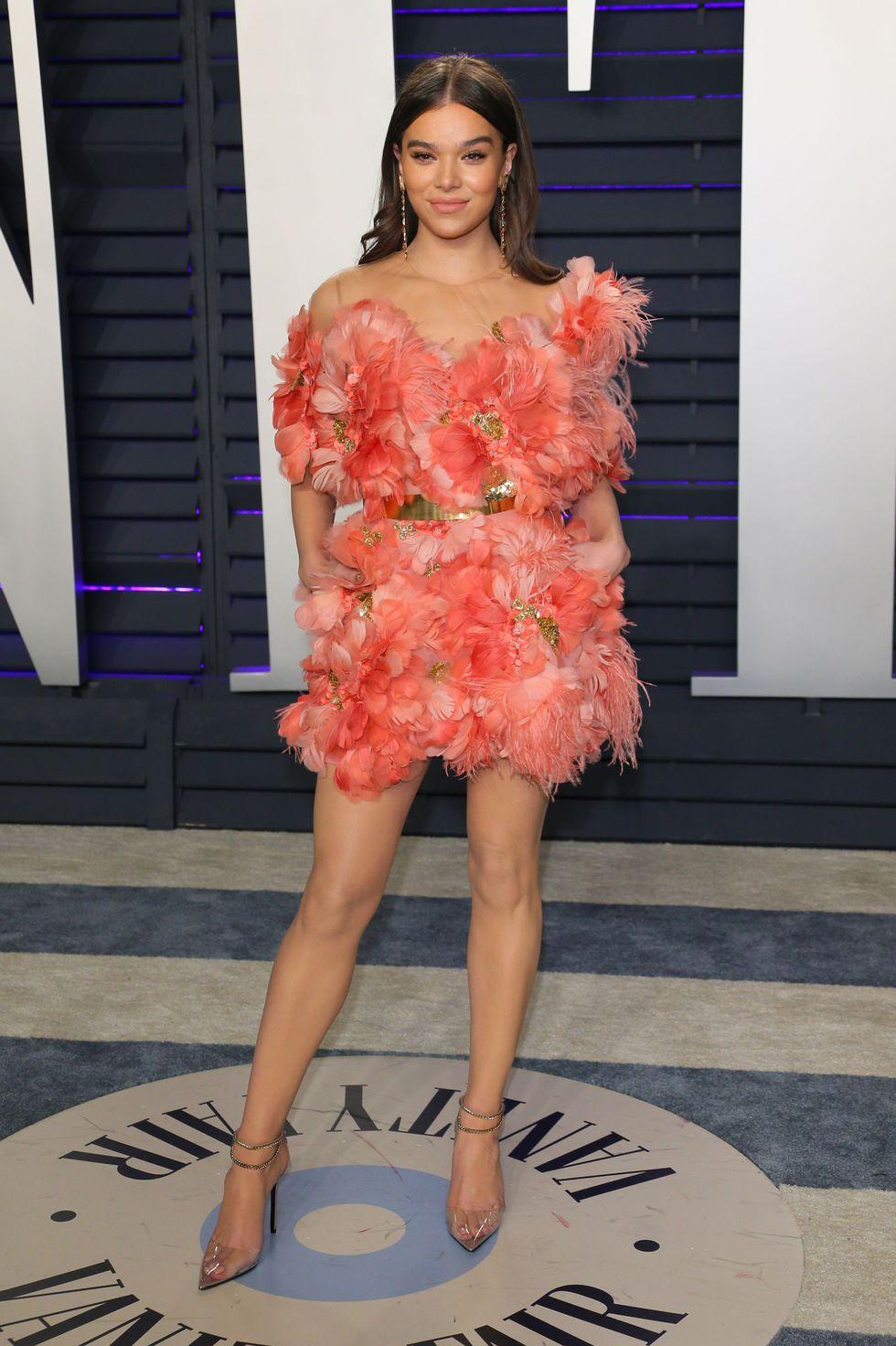 Helen Mirren was one of the people who led the pack reminding us you can stun at any age. In her twirly-swirly tulle confection from Schiaparelli, she looks joyful and colourful. By matching her lipstick with the colour of her syphon dress she completed the look flawlessly. 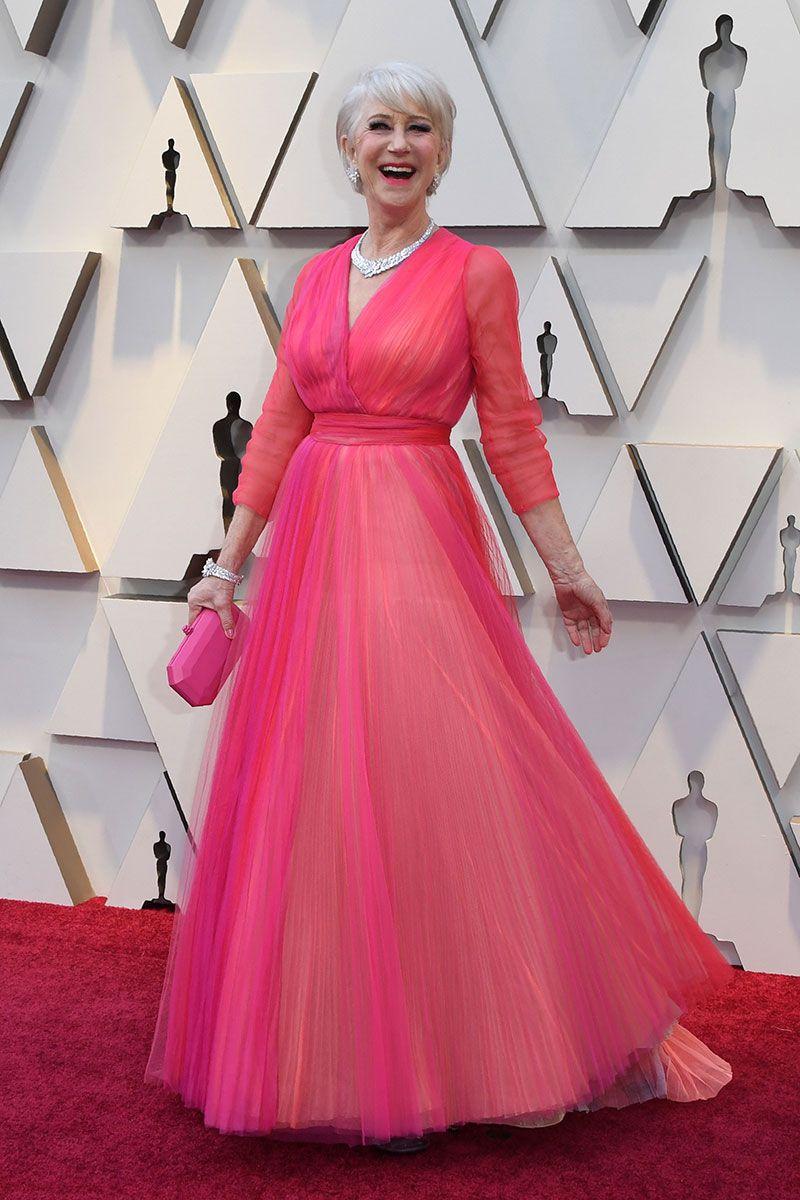 The 2019 Oscars red carpet look choice of American singer and songwriter, Kacey Musgraves was a pink standout in layered tulle Giambattista Valli dress with a crystal belt at the waist. The singer wears all that volume like a couture dream. The recent Grammy winner was a dessert dream in her pale pink dress. The look was chosen as one of the best pink outfits of the ceremony.

Known for her breakthrough performance in the 2018 drama film If Beale Street Could Talk, the actress Kiki Layne’s first Oscars night choice was this custom pastel pink Atelier Versace column gown with an oversized ruffle bow and cutout in the back.  Her hair was very complementary and not competing with the structure of the outfit. Kiki completed her look with Swarovski fine jewellery and Stuart Weitzman shoes. 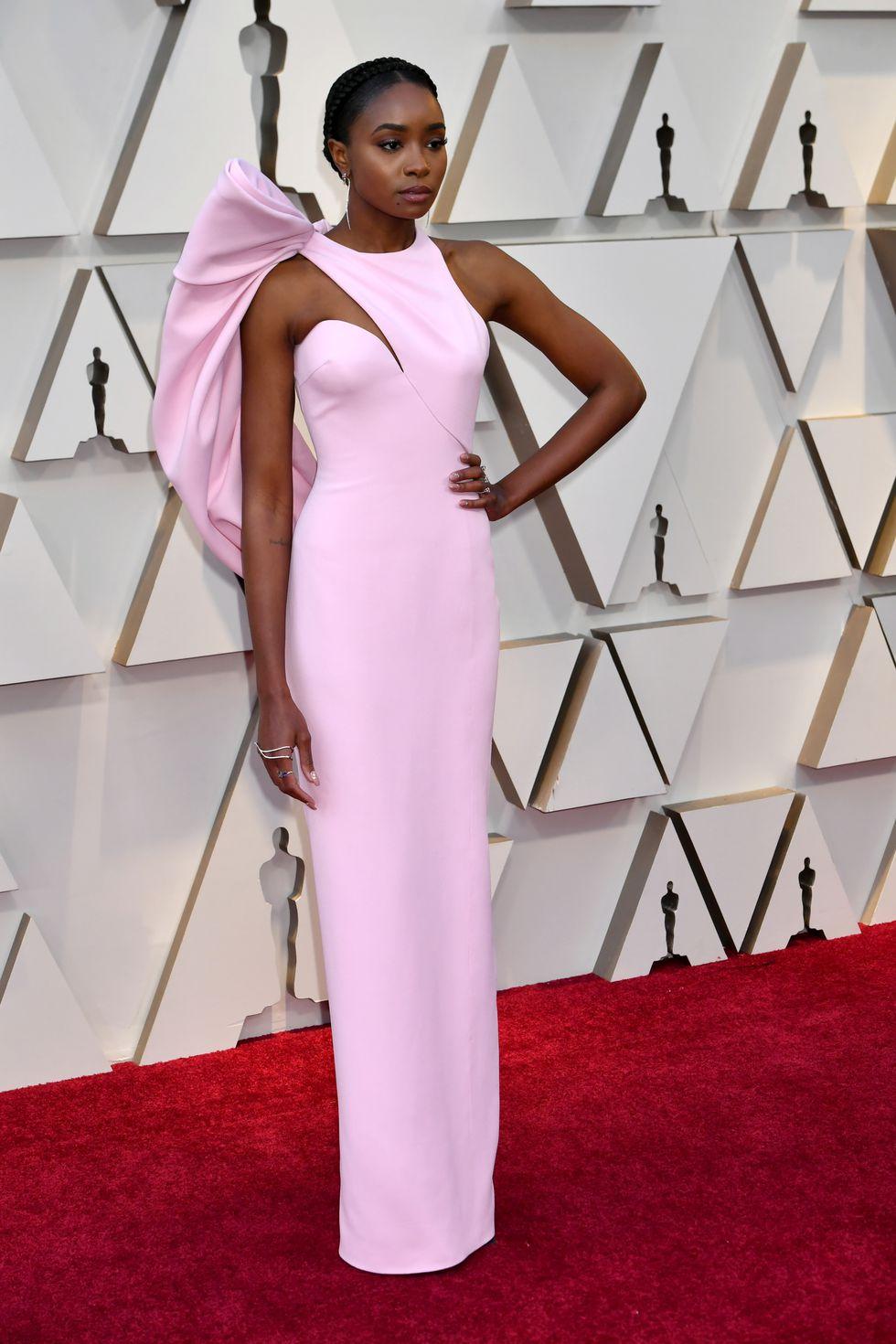 29 years old American actress and model, Harrier brought the fashion to the red carpet in an ethical and eco-responsible Louis Vuitton creation sky-blue gown. The gown was custom made in silk, embroidered with glass beads, Swarovski crystal shards, and sequins. Her makeup and hairstyle perfectly completed the look. She wore a matching coloured strapless shoe under the dress which makes the total look flawless. 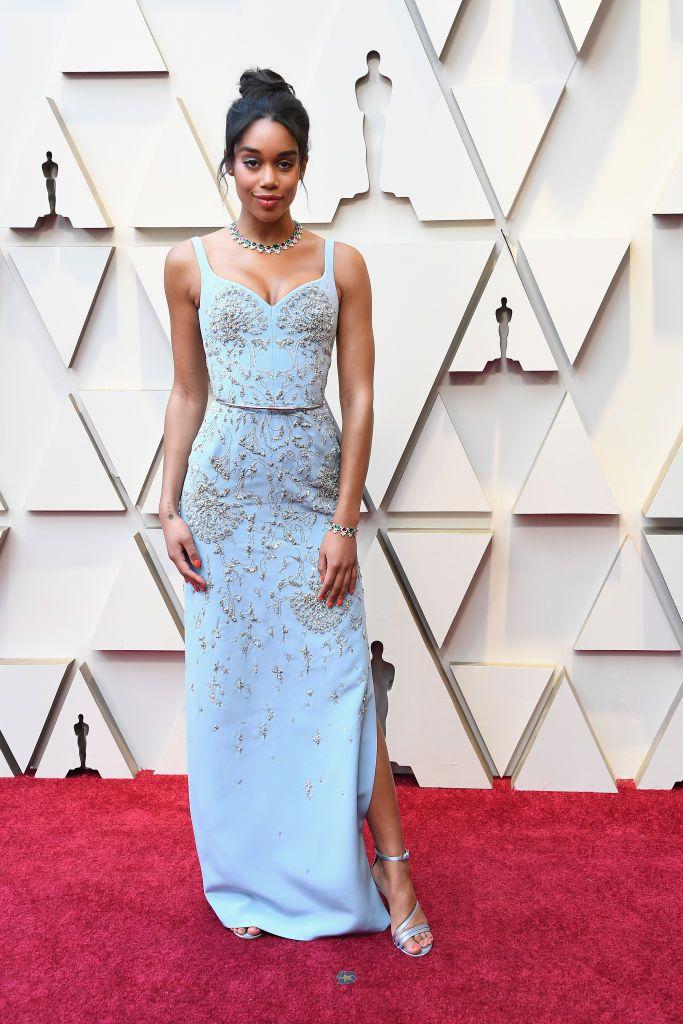 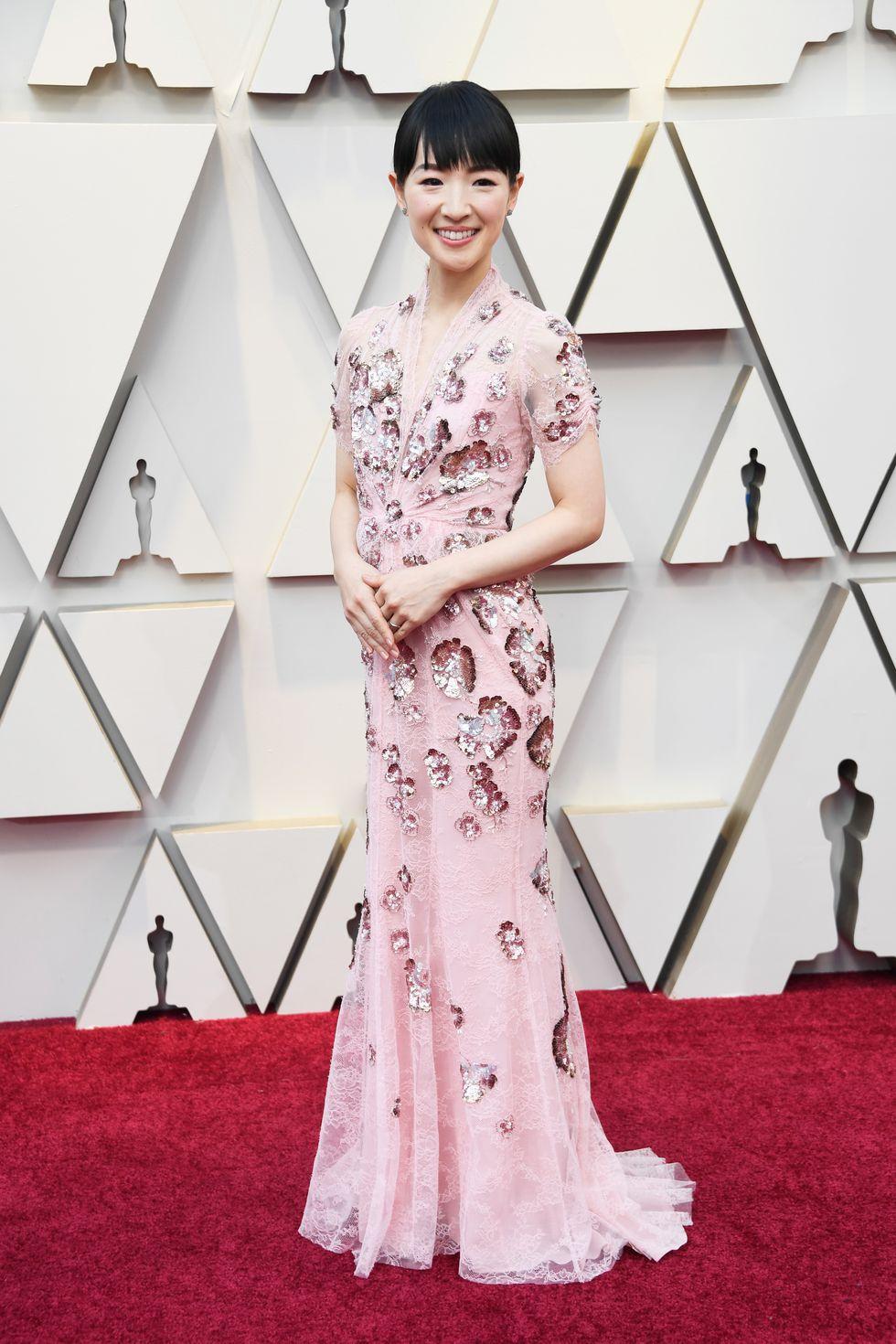 The beautiful actress Meagan Good selected a Georges Chakra Couture look for the night. With this pinky asymmetric cut gown, she brought her own pretty-in-pink mood to the big night. As the dress itself, she kept the rest of the look simple to make sure the dress was on the center of attentions. 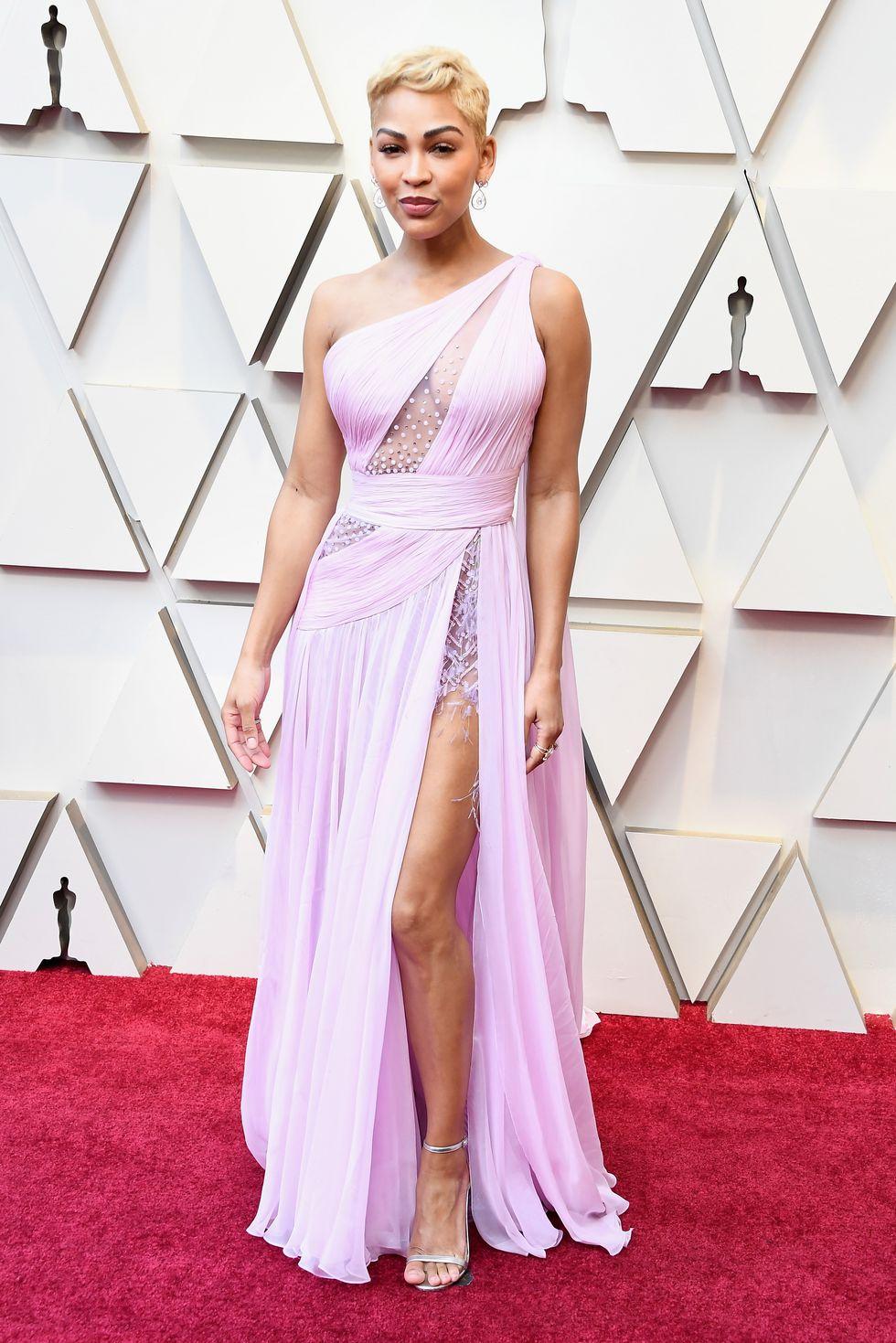 Sometimes, simple is really the best. Regine King’s white gown made by Oscar de la Renta featured a sky-high slit but aside from that she kept things classic with a clean strapless neckline. King let the focus stay on the gown itself by keeping her hair and makeup natural and streamlined. She looks amazing in her ivory, strapless with an asymmetrical train dress. She took home the award for Best Actress in a supporting role. 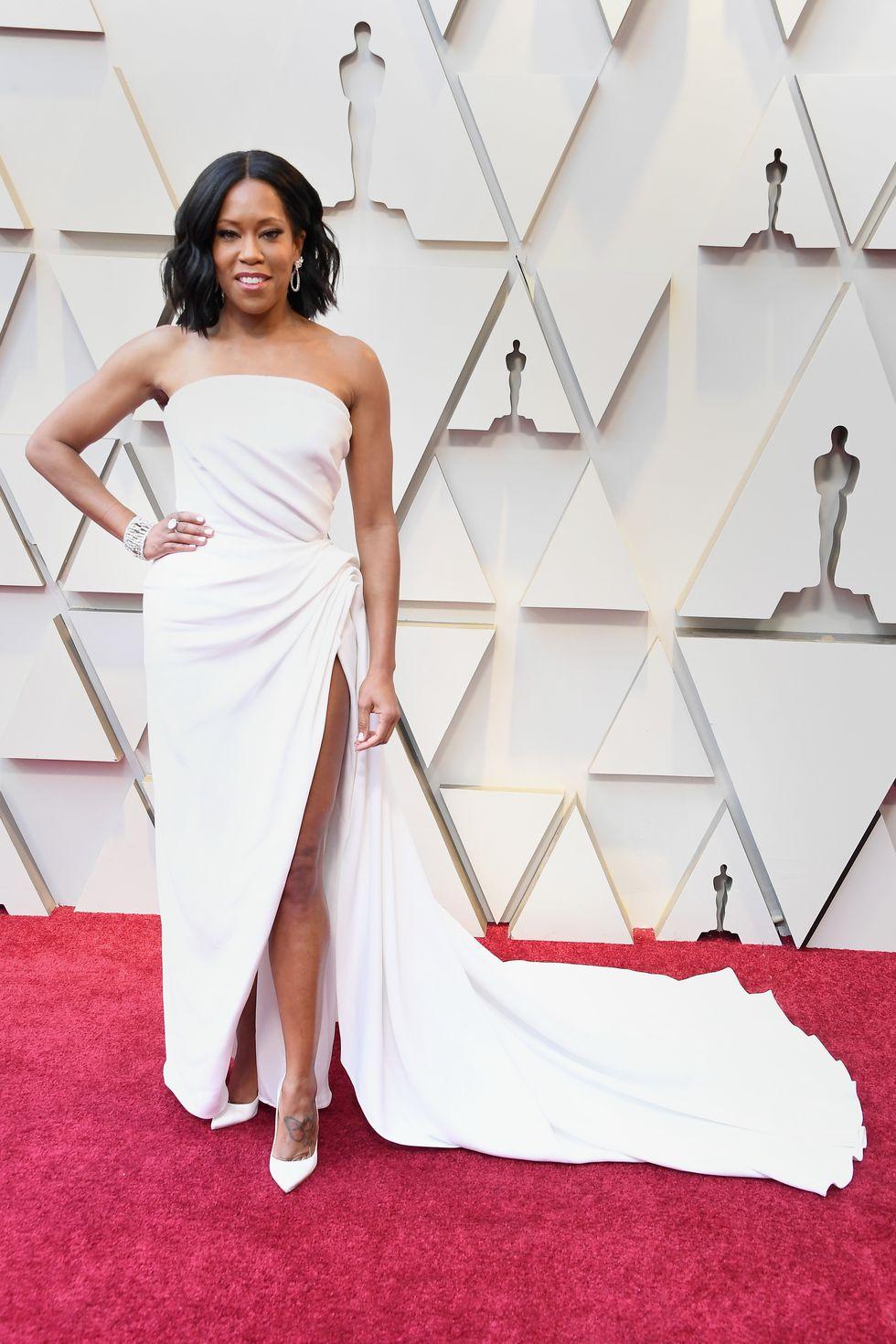