The Met Gala is perhaps the last Hollywood event, where there is a place for real fashion. A fashion that does not pursue profits and followers, but which reflects pure art. Being based on changing themes, Met Gala every year gives viewers the opportunity to appreciate the amazing performances.

After Met Gala 2019 we decided to remember the brightest stars, which made the Met Gala evening different from others.

Singer Cher put on an absolutely transparent dress with embroidery, trimmed on the hem and sleeves with white feathers. Its author was designer Bob Mackie, who later made even more resonant images for Cher. Although they went down in history, they had no influence on the development of fashion, while the “naked” dress with Met Gala was repeated by its colleagues several times - for example, Peter Dundas in 2015. As a kind of flashback, she appeared on the red carpet of Met Gala Kim Kardashian, which looked like Sher in her attire. Interpretation of Roberto Cavalli entered the top of the best dresses of the evening and, coupled with the rest, reverted the trend to the nude beauty that began just from the eccentric outputs of the 70s. 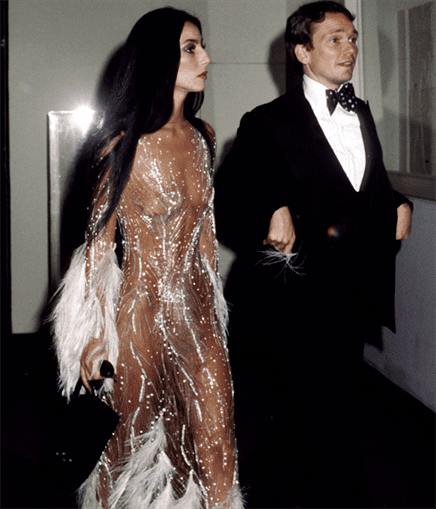 The triumph of 1996 was dedicated to the collections of Christian Dior and gathered around him loyal admirers of his talent. The designer of the brand, John Galliano, came to the Metropolitan Museum by the hand with Diana Spencer, divorced from an English prince, but who did not lose the love and recognition of the public. Galliano sewed a rather modest dress in a linen style for her, which, of course, stood out from the rest. In addition to it, Diana picked up a legendary necklace of seven strands of pearls and sapphire, as well as a personalized bag “Lady Dior”, which the other guests of Met Gala wore in different variations.

It was her last deafening appearance: in six months the ex-princess died in a car accident. Galliano did not have time to implement so many sketches for his main client! 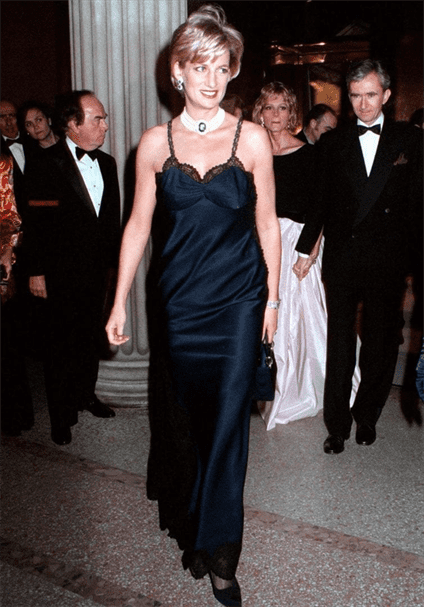 A good tradition at the Met Gala was the appearance of stars along with the creators of their images. Knowing that this would provide a considerable stir, they were published with non-public characters, and sometimes even dressed with them in the same manner. So, Sarah Jessica Parker in 2006 killed two birds with one stone, persuading the introvert Alexander McQueen to accompany her on the red carpet and add a tartan cage to her tuxedo - exactly the same as on her dress. The theme of Met Gala was “Anglomania” and the Parker-McQueen tandem stood the dress code perfectly. As acknowledged by the actress, this is the main task of the event, which makes the beauty and tendentiousness of the attire secondary. Although the latter was also present in Sarah’s performance: the asymmetry in zero was just becoming fashionable and seemed to be something quite extraordinary. 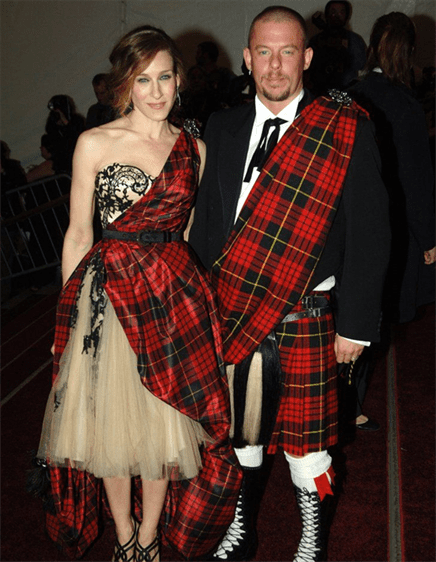 “Punk: From Chaos to High Fashion” was the theme of the costume institute exhibition and the 68th in a row by Met Gala. Guests got a chance to indulge and present the grunge in all its glory: with spikes, leather jackboots and smoky eyes. Miley Cyrus, who at that time transformed from Hannah Montana into the main New York freak, got out of the limousine in a net dress from Marc Jacobs - not as frank as we often see it in shows, but also very eccentric. The image was focused on the short hair of the singer, raised in a mohawk typical of punks: Miley looked like a girl from the 90s, a devoted fan of Kurt Cobain. This outfit was a pass to the pages of the world press for her, which discussed the grid more than any other outfit. So, Marc Jacobs saw the drama of Cyrus even among the abundance of stuck out tongues and obscene gestures. 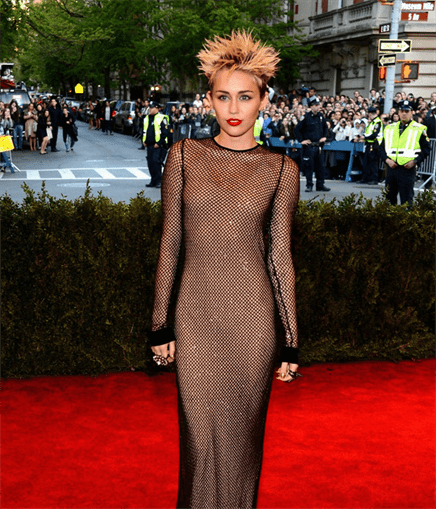 In 2015, Beyoncé was nicknamed the Queen of the Eveningş The ponytail, platform shoes and an absolutely transparent dress, covering only the most piquant places of the puffy star, had nothing to do with the “Chinese Mirror”, which obliged the guests to reflect the culture of the eastern country in their dresses. But the R'n'B Diva, which creates a sensation on almost every Met Gala, forgave this “mistake”: its appearance on the Met Gala was so brilliant that it made visitors forget about the exhibition and other women who by all means tried to grab a piece of glory Beyoncé. “I do not care about the topic, do not care about the red carpet. I just want to post beautiful photos on Instagram and enjoy this celebration, ” - fans wrote in social networks, as if voicing the thoughts of Mrs. Knowles-Carter. 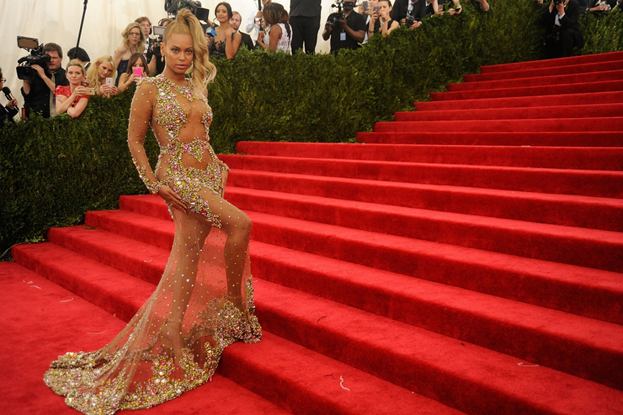 Rihanna, the only guest of China's Looking Glass of China, in a dress from a Chinese designer, also suffered from censure by fashion critics that year. She rose to the Metropolitan Museum as a real empress: in the crown, necklace, and in all yellow, which in Asia is considered the color of royalty and grandeur. This image was prepared for the singer for two years: from the moment when she saw the work of Guo Pei on the Internet, and until the final fitting before the Ball. This outfit was an excellent opportunity to demonstrate the genius of Chinese designers who are not limited to the production of fakes Gucci and Louis Vuitton and are capable of creating real objects of art. 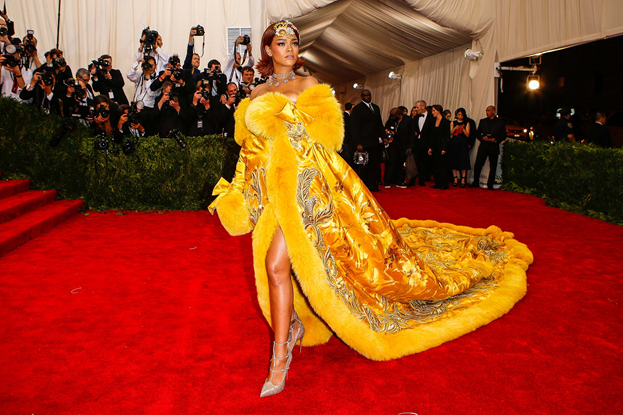 The singer appeared in a dress from last year’s spring-summer couture collection Maison Margiela. His designer John Galliano, as noted by Western critics of fashion, very truly understands the legacy of the fashion house entrusted to him, however, an equal sign between the works of Martin Margela and Ray Kawakubo is not worth it: if Ray is a fan of "fashion as art", then Marzhela is an adept utilitarianism. “Fashion is not art,” he said in one of the first interviews at the dawn of the 80s.

Nevertheless, the red dress, decorated with appliques and draperies, still got into the list of the best dresses of the evening. The main adornment of the already richly decorated attire was a mask on Katie’s head, on which the word Witness (“Witness”) was embroidered with black threads. This embroidery is the name of the singer's fifth and last album, which she presented a month after Bal. 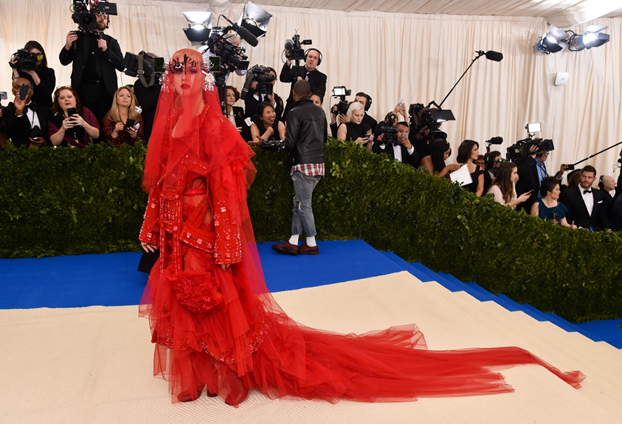 Against the backdrop of endless “naked” dresses and lush “princess dresses”, Katie’s dress looked at least original, responding to two of the evening’s tasks: to surprise and inspire.